In 2013 I was commissioned to write a one-man play for Walsall Museum services, drawing its inspiration from objects in its collection, in particular the Bayard’s Colts, a number of strangely carved wooden ceremonial poles whose significance still remains something of a mystery. The play, “Life and Times of the Tat Man”, was given six sell-out performances in one of the rooms in the museum, which was converted into a studio theatre, between April and June 2014, and is now on tour until December throughout the Midlands.

The play was directed by Glen Buglass and is performed by Tony Barrett as the Tat Man, who, from his home in the scrapyard, tells “rag-and-tat” tales of travelling folk and bloody births, blacksmiths and devils and magical horses,taking the audience on a journey that leads from the world of folk-tale and myth, to the battlefields of the First World War, where dreams are shattered, and he must gather the pieces, and try to make them once more into something whole. 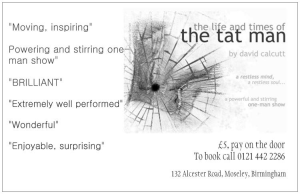 Up and coming performance dates include:

For a review of the play see: http://ow.ly/xEKER

You Tube promo video of the show:

Demo of one of the songs from the show:

2 thoughts on “LIFE AND TIMES OF THE TAT MAN”